Return of the Living Dead – Rave to the Grave

Synopsis:
Taking the Living Dead franchise another step further, this campy sequel finds the survivors of the Necropolis reviving bad habits and snooping around Uncle Charles’s experiments. When they uncover a container filled with a substance called Trioxyn-5, they assume it must be safe and start selling it as a party drug. But when a Halloween rave transforms hundreds of Trioxyn-5 users into flesh-eating zombies, the scene gets way out of hand.
Trailer:
Movie Info:
Rating: R
Directed by: Ellory Elkayem
Written by: William Butler, Aaron Strongoni
Release Date: March 20, 2007
Runtime: 8Minutes 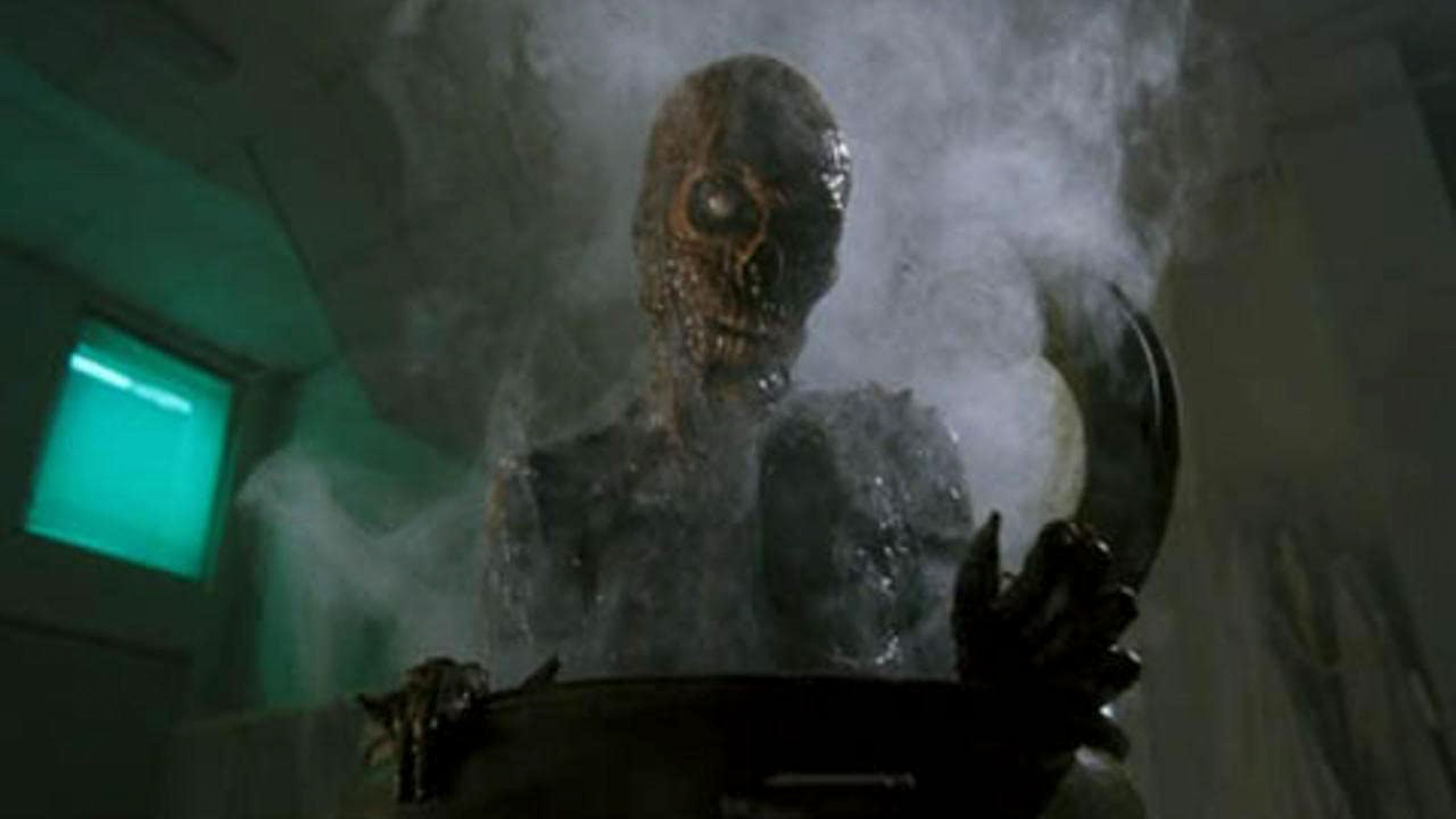 What can I say about Return of the Living Dead: Rave to the Grave? Out of all the zombie movies I’ve seen, it isn’t the absolute worst I’ve ever seen. That’s not really helpful, though, as a benchmark of quality. That’s like saying “Yeah, I lost my kids and house in a messy divorce, but at least I don’t have leprosy” or “Of all the people I hate, I don’t hate you the most.” There’s always a margin for things to be worse. Still, when given the option between something bad and something even worse, bad is clearly the way to go. So it’s nice to know that Rave to the Grave isn’t the bottom of the barrel, it’s on the layer above.

One of my biggest complaints about this movie is the protagonist. He’s bad. As in, I fucking hate his guts. Now I know we’re in the age of the anti-hero and it’s better to be real than to be “good,” but this guy isn’t Patrick Bateman, Dexter Morgan or even Dylan McKay. He’s not even despicable, he’s just a dick. The first thing you notice about our lead male, Julian Garrison (John Keefe) is that he has no identity (and viciously bad sideburns). He is an “athlete.” What does he play? Fuck if I know. He does the same stretches I did in ninth grade to get prepped for dodgeball, has no idea how to dribble the basketball he carries around and wears shirts with “Baseball” slapped all over it. Does he need any athletic skill to battle the zombies? Nope, or at least he needs as much athleticism as his geneticist girlfriend (Jenny Mollen), who, in my opinion, kicks more ass per capita. He vascillates between being moody, bossy, useless and pretty uncompassionate. Julian has all the appeal of a sociopathic three-year-old and this is who I’m supposed to root for against the zombie horde? If this guy went to my college, I’m pretty sure I’d kick his ass and I’d damn sure never go to any party, even if his buddies sold me the best drug that would never exist.

I think the only think I dislike more than Julian is the writing. Though, let me clarify, I don’t dislike all the writing. I just dislike the writing that has anything to do with the plot or would in anyway be meaningful, if it wasn’t written by two chimps in two pitch black rooms on different sides of the globe. That’s the only way I could explain how bad the dialogue is in this movie. Am I expecting too much to have two characters talk to each other and not past each other? Probably. Remember, though, I said not all the writing was bad. For instance, I liked pretty much every scene with the two government agent characters, Gino (Sorin Cocis) and Aldo Serra (Claudiu Bleont). Sure, the guidos from Jersey Shore sound more Italian than these two would-be Goodfellas, but that just adds to their charm. They are meant to be part comic relief, part Deus ex Machina, with their Nissan with its bottomless pit of zombie-killing weaponry, but they were, for me, the movie. They drop puns, value nothing so high as a pool with a really big slide and have no concept of the word “overkill.” There’s a station wagon with maybe four zombies in it, should we reach for the assault rifles? Nah, that situation clearly calls for a rocket launcher. And yeah, they do drag. Overall, they’re funny and, more importantly, fun.

And that’s where this movie makes up a lot of ground: fun. The filmmakers have definitely captured the campiness of older 80s zombie flicks. Gratuitous is the rule, not the exception for Rave to the Grave. There is T aplenty and at least one hilarious moment of A. Violence is also done the way it should be in a zombie movie: over-the-top. Zombies maul the living with gusto and in several bloody chunks. The zombie killers are no slouches, either, wiping out the undead in myriad and entertaining ways. If you’re looking for where the effort went in the making of Rave to the Grave, it’s got to be in the special effects department, especially where gore and explosions are concerned. The zombies themselves are nothing special, but here’s where a little understatement is nice. They aren’t overdone, they just look like exactly what they are: zombies. They are gaunt-faced, pale, blood soaked and the good looks of someone who took two turns going face first down the ugly tree.

Return of the Living Dead: Rave to the Grave is a good bargain bin pickup and would fit perfectly in a cheesy zombie movie marathon. It’s a throwaway flick that’s ok to watch once and would be much improved by a six-pack of your favorite brew.

P.S. In case you were wondering, the rave sucks. It’s a good thing the zombies showed up.

I liked this movie. The Return of the Living Dead franchise has always been the other part of what I see as a two part genre. There is the zombie movies, that make you say “Holy Shit” I better board up the doors and windows and then there are the ones that make you want to get drunk or high and watch some good old fashion 80’s cold war T’n’A Horror movies. Rave to the Grave is the later. Although I am a bigger fan of the “Holy Shit” zombie movies, I do enjoy these ones as well. The zombies actually moan “BRAAIIINS” and walk slowly yet have no problem catching their prey. Not only do the zombies look dead, but the seem possessed, and if that isn’t enough this form of zombism comes with Neanderthal like skull structure. If you are looking for a zombie movie in which you can take notes so you can send Max Brooks an suggesting new survival tactics, this is not your movie. However if you are the happy go lucky zombie fan, this one is certainly worth the watch..