In a world ravaged by a virus infection, turning its victims into the Undead, Alice, continues on her journey to find survivors and lead them to safety. Her deadly battle with the Umbrella Corporation reaches new heights, but Alice gets some unexpected help from an old friend. A new lead that promises a safe haven from the Undead takes them to Los Angeles, but when they arrive the city is overrun by thousands of Undead – and Alice and her comrades are about to step into a deadly trap. 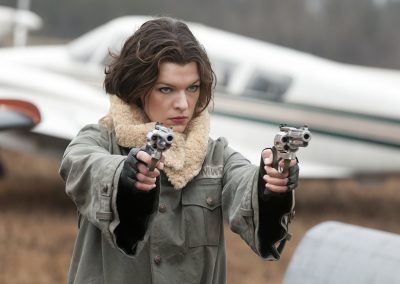 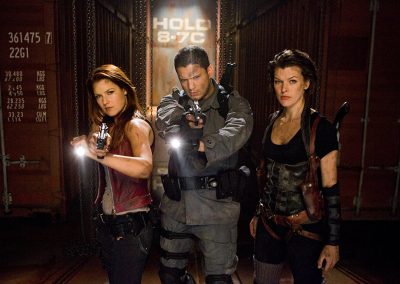 I’m not going to talk about whether or not this movie lives up to game series it’s based on or even the previous movies. The Resident Evil movie series, to me, is more or less an alternate universe that runs parallel to the games. Characters like Claire and Chris Redfield, Jill Valentine and Albert Wesker make appearances and familiar organizations like Umbrella and S.T.A.R.S. are used, but they are otherwise unrelated. That said, that doesn’t make this series and especially this movie an abomination like any video game license Uwe Boll is allowed to shit all over and why? Because unlike those movies, Resident Evil: Afterlife is at least decent as a movie. In fact, it is a more than decent movie. As to the other point, I’ve always found it a moot point to compare sequels to sequels. If a movie’s good, does it really matter what movie came before it? I mean, Dumb and Dumberer didn’t suck because it wasn’t Dumb and Dumber, it just sucked. Period.

Resident Evil: Afterlife didn’t suck. It was pretty kick ass. It was an action movie lover’s action movie: violent, explosive and fast. Plus, it has Milla Jovovich, Ali Larter and a relatively new face to US audiences in Kacey Barnfield. Three attractive women of their caliber more than meets the quota for beauty in a movie otherwise built on brawn. It also helps that Milla Jovovich is the primary proponent of ass kicking in this movie, but that’s been a staple of the film series. That’s like saying that in the next Friday the 13th, Jason will kill someone. I guess the question is how much ass she kicks, to which the answer is: alot. Her first scene in Afterlife alone has her inflict Godzilla-level damage on Umbrella’s Tokyo Headquarters.

The problem that always comes up with action movies, however, is if the violence overpowers the plot. This is an especially germane concern for a movie based on a game that’s primarily cerebral. Resident Evil was one of the first games to be classified as “survival horror,” a genre that meant less shooting, more thinking, not unlike the way the Metal Gear games put tactics first. When I mentioned before that comparing the movie and game series was impossible, this is why. The movies are action movies, and Afterlife is one of the more action-packed of the series. The only reason anyone in Afterlife runs from a zombie is if there are fifty of his buddies coming along with him and, even then, a good fifteen brainmunchers will get dropped before the call for a full retreat. That doesn’t exactly jive with the way the games work, where stacking the odds that way is a one way trip to a “You’re Dead” screen. What does jive is the use of martial arts ala The Matrix, which makes the film feel like, well, a video game.

As for the zombies, they are awesome. I don’t know who made the rule that the more awesome your zombies are, the more you avoid using them, but like Zombieland, Afterlife follows that rule. The first horde of the zombies doesn’t get screen time until at least halfway into the film. Even once they’re on the scene, they take at least ten more minutes to actually pose a threat. The horde includes two mainstays from the Resident Evil 5 zombie rogues gallery, but I’ll leave you to see which ones (not that the trailers don’t spoil that, anyway). In the end, it’s hard to gauge the hot zombie action. When there is zombie action, it’s pretty friggin’ hot, but this a movie that plays hard to get.

Resident Evil: Afterlife is a good movie. Like the cool kid at school, it knows what it wants to do and does it. It’s not a revelation nor is it reinventing the action flick, but who cares? It’s got kung fu, guns, decapitations, a half decent story and the soundtrack’s awesome. It crunches, pounds and just plain suits the film. In a final summation of the value of Resident Evil: Afterlife – see the damn movie.