Zombie Movie Review: Masters of Horror: Dance of the Dead 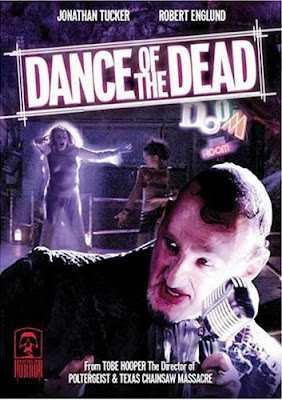 Teen waitress Peggy (Jessica Lowndes) rebels against her overprotective mom by joining a group of punk patrons for a night at the Doom Room, where the entertainment is provided by an eclectic troupe of reanimated corpses. But Peggy gets an otherworldly shock when one of the undead dancers turns out to be a figure from her past. Director Tobe Hooper’s frenetic, postapocalyptic horror features a soundtrack by Billy Corgan of Smashing Pumpkins fame.

This was the world’s longest 1 hour movie. It took me forever to watch because it was so horribly boring and just plain dumb. I felt no attachment to any of the characters, the story was lame and the acting was just plain average. This was pretty disappointing considering this came from the guy that gave us Poltergeist and Texas Chainsaw Massacre. It was barely about zombies and I wouldn’t even call it a horror movie. It was just weird and boring. I would recommend staying away from this one.